The ‘Pteridomania’ series began as a response to the early 2020 Australian bushfires. As whole ecosystems burn, will the landscapes we once previously enjoyed so freely become rare and unusual? Could the pockets of remaining natural splendor take on a coveted and prized status? Would these pristine specimens of our fertile past become walled in and caged off, protected from disease and pests for posterity?

The possible elevation of select elements of the natural environment presents an intriguing mirroring of the fern craze (Pteridomania) of the Victorian era.
With their purpose designed grottos, cathedral like glasshouses and intricate portable Wardian Case’s the Victorians successfully transposed what was once a simple and quietly beautiful fern into something that was protected, cultivated and elevated to cult like status. 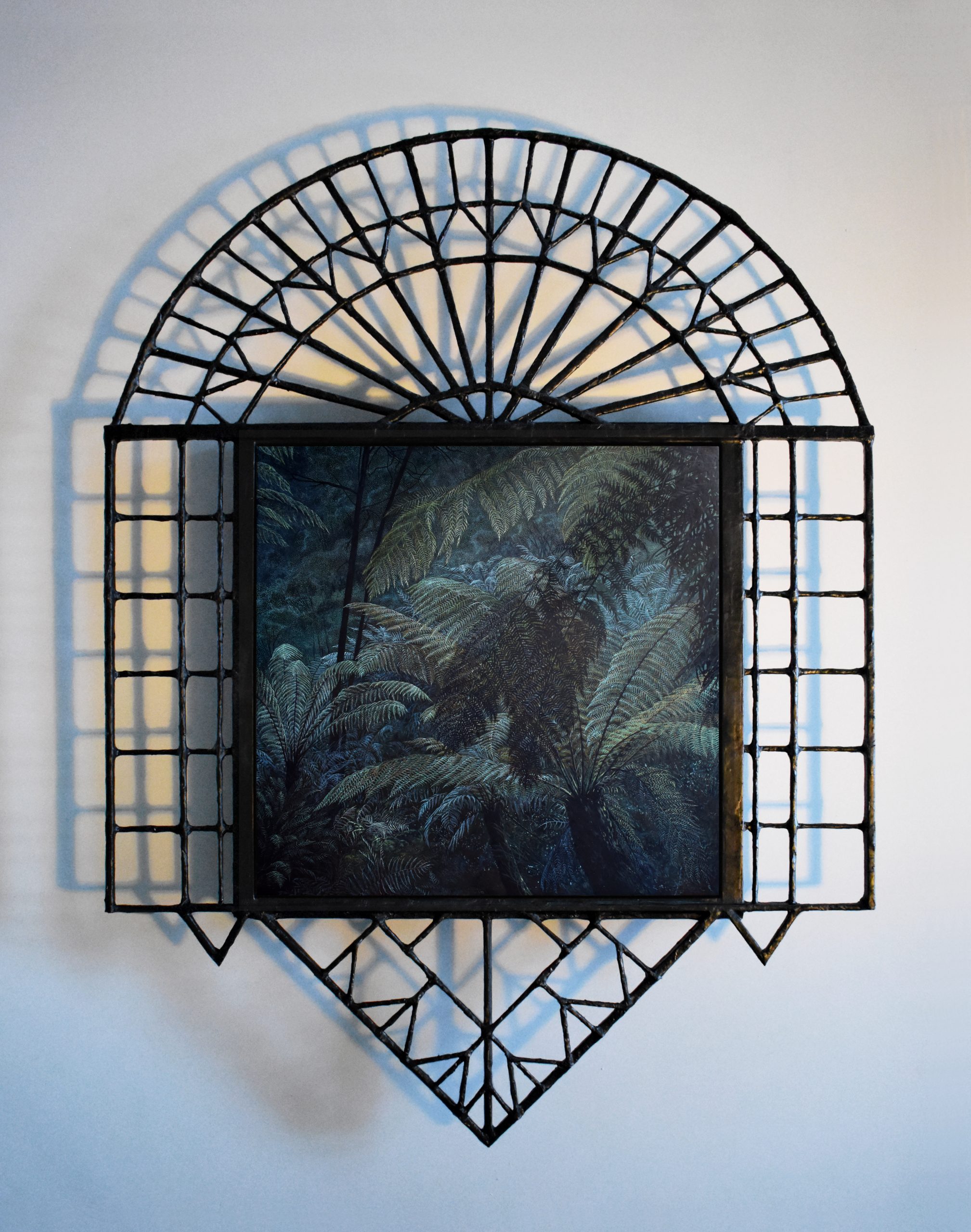 The word ‘Pteridomania’ comes from the Latin name for fern – Pteridophytes

By the Victorian era the exotic plant trade was a thriving business in Britain, supported and championed by plant nursery’s such as Conrad Loddiges & Sons Nursery, which had established international reputation for selling and cultivating tropical plants. By the late 1820’s the company were offering around 80 different (but mostly local) fern specimens.

In 1829 Nathaniel Bagshaw Ward (British surgeon/naturalist) created the Wardian Case. An airtight glass container which could be used for transporting live plants over great distances.

These Wardian cases (shaped like miniature glasshouses) revolutionized the movement of live plants and had major consequences for environmental and societal changes in the following centuries.

In 1833, the first Wardian Case transported ferns, mosses and grasses from London to Sydney. In 1834 they were returned to London, this time containing a delicate Australian coral fern (Gleichenia Microphylla).

The cases allowed the Loddiges Nursery (and others like them) to thrive, importing exotic plants from Australia. The Loddiges built the world’s largest hothouse in East London in the early 1800’s which included a designated fern nursery, filling it with ever more exotic fern specimens.

Ferns were already associated with magic and primeval aspects of nature, but to promote his business and new hothouse Loddiges needed to further hype the fern’s importance within the public conscious. Rumors began spreading that fern collecting showed intelligence, improved virility and mental health.

Loddiges neighbor, Edward Newman (Botanist), published ‘A History of British Ferns’ in the 1840’s which supported Loddiges supposed claims linking fern collecting to intelligence, and around this time the Fern Craze began in earnest. (Derisively dubbed ‘Pteridomania’ by Charles Kingsley in 1855).

It was one of the few hobbies that transcended class and gender. It was actively encouraged among the lower classes by the aristocracy as a means of elevating themselves and due to it’s perceived wholesomeness, botany was one of the few activities available to women who wanted to experience excitement outdoors. (Ferns had long been associated with female sexuality and during the repressed Victorian era, ferns allowed for a covert means of expressing sexual desire – apparently prompting a rise in romance and relationships ostensibly centered around fern cultivation).

During the 1860’s – 1870’s Tasmanian Tree Ferns (Dicksonia Antarctica) became an exchange plant for the Royal Society Garden and were commonly sent to England in Wardian Cases. (Dickonia Antarctica or Man Ferns, are valuable slow growing plants that only reproduce for the first time after around 23years). In 1999 the UK reportedly took 91% of all fern trees exported from Australia. By 2002 it was estimated that 90 000 tree ferns were exported from Australia each year. While in Australia and the UK, tree ferns are generally marketed as having been ‘saved’ from Tasmanian forests felled for woodchips, there are fears that many are taken from the wild, leading to degradation of old growth forests. With industry regulation long overdue, corruption in forestry management was brought to the forefront of the public consciousness with the 2003 Australian Senate committee investigating the Tasmanian forestry industry. At the hearing the illegal destruction of Tasmanian landscapes was described as an ‘ecological disaster’.

During the Victorian Era, Pteridomania came to represent much more than a simple appreciation of fern plants. Today, the trade and cultivation of ferns continues to represent a much bigger picture; ecological sustainability, historical influences, societal fashion and taste, architecture and gender and class politics are all intrinsically tied up with the fern, impossible to separate one from the other.